The day is coming to a close when the phone in the office rings. On the other end is a harried voice – “I’m Hearst! Benjamin D. ! Look, just punch it into your computer! Red Baron eight one eight! Come on, hurry! I’m in Picnic!… Oh, please don’t tell me I got the wrong num—”

Not hearing the responses from Markov, the phone is cut off. Calling their supervisor Field Director Calvin Jones in New York when their computer files noted extra-secure security, they learn that the Hearst is an Hoffman agent who has been considered deceased after 16 years of no contact; he had been investigating a death cult thought to be behind a series of murders in the Florida area that the local law enforcement had attributed to drug gangs. Hearst had gone deep undercover to infiltrate a group he tracked down, but then all communications stopped. He tasks the group with rendezvousing with Hearst while he contacts the re-surfaced agents’ supervisor. 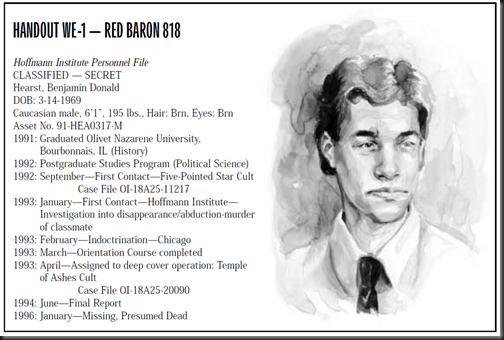 The agents trace the call to a pay phone at a gas station in Picnic, Florida and the 4 hour drive from Miami gives them plenty of time to mull the many questions that remain open. Where has Hearst been? How was there no sign of him anywhere in such a connected world?

Upon arriving at the address, they are greeted by the flashing lights of an ambulance and Sheriff’s patrol car. The attention is focused on a middle-aged man sitting on the paramedic gurney; although now shaved bald, heavier-set and aged, he still bears resemblance to the man in their file. As they approach, the Sheriff half-heartedly waves them off before Markov informs him that the confused man is his acquaintance – one Ben Richards.

The sheriff informs the agents that they were called about an hour prior from the neighbors reporting a near-naked man wandering about the houses in the area. They had arrived to find him in the similar state in a backyard treehouse of a house whose property abutted the gas station. Although uncommunicative, they were able to talk him down and for the most part, he appeared to be healthy.

They successfully convince Sheriff Miller (who was coming to the end of his shift and just wanting to head home) to release him into their care. Yet, Hearst is not of much help – he wears only torn jeans and is now rocking back and forth, arms hugging his chest. He is unresponsive to questions, but Isaac is able to lead him back to the van while the others went to gather more information.

In the treehouse, they found a necklace with a silver inverted cross. As the agents left, Sheriff Miller also stopped them and handed over a clear plastic baggie with a few coins wrapped inside a cocktail napkin, the latter with a doodle of a parrot from a “Happy’s Place” in Berry, Florida.

On the way back to the Hoffman office in Miami, Hearst remains in his uncommunicative state. The agents reach back out to Field Director Jones, who by that time, has gotten Hearst’s supervisor Intelligence Department Chief John Randall on the phone. He tells them that “Ben got us pretty far inside the Temple of Ashes, but he suspected there was another cult calling the shots. He was going to look for the connection when we lost him. If he found it, we need to know what he knows.”

For support, Randall sends over the limited electronic files he has and tells them that the Institute will gather as much information from the archives as they can get together. 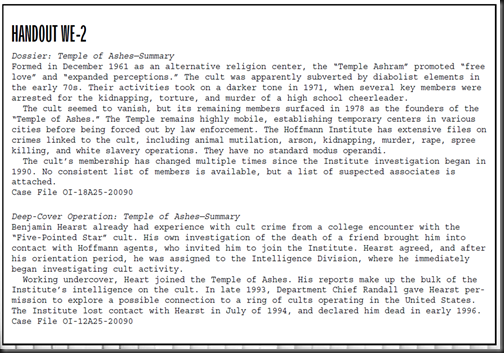