Examing the various items found, the agents follow the lead on the napkin and head to Happy’s Place. They arrive mid-day in Berry, Florida at a mostly empty biker bar, with only a few patrons inside.

Questioning the bartender, they learn that a man matching Hearst’s description – whom he refers to a “the bald guy” was part of a bike gang that started showing up and hanging around the bar about 2 months previous. During the conversation, the agents see some pictures of a young woman behind the bar who has a parrot tattoo on her should – a parrort identical to the one drawn on the napkin found on Hearst. The bartender tells them that she was the best waitress he ever had, by the name of Lorene Foster. She was the object of the bald guy’sflirtations, and packed her bags and went with the gang when they left town a few weeks prior. He too had heard the rumors that she had been murdered by the gang, and sadly believes them to be true.

The agent’s questions draw the attention of a trio of biker’s that were playing pool in the bar, who attempt to disuade them – with their fists. The first blow sends Maverick to the ground and rather than reciprocating with his fists, Lester pulls out a pair of pistols and ends the fight – by way of acute lead poisioning.

In the violent aftermath of the conflict, the agents fled back to Miami; fortunately for them, the deaths did not attract too much law enforcement attention – the two suviviing bikers refused to cooperate with investigators, and the dead biker had quite a rap sheet accumulated.

At the Miami office, they begin the process of trying to locate Lorene Foster in hopes of getting a lead on what had happened to Agent Hearst. But it appeared that a week after her departure from Berry, there was no further trace of her. Credit card and cell phone use tied to her all stopped, having traveled no further north than Hollywood, Florida; neither were there any recent law enforcement records. A call to Field Director Jones at the NY headquarters prompts them to follow on the rumors of her death, and a search of Jane Doe’s leads to a body of a young woman with a parrot tattoo on the shoulder. Maverick was able to convince the eager coroner’s assistant to provide the autopsy report. 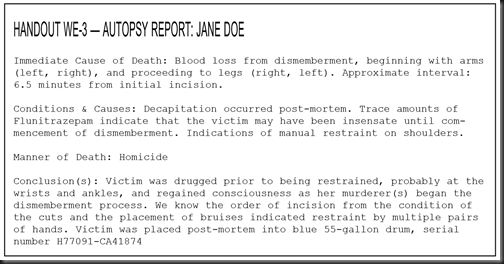 Of particular interest, the barrel she was placed in was still in at the morgue and had a partial label which he helpfully read to the them: “Under the serial number it says ‘Eagle Storage,’ something, ‘—ade City, FL.’ And there’s a partial number: —5-0414.” A quick search internet search returned an address for a Eagle Chemical Waste Storage located in Dade City, Florida – ~40 miles north of Berry.

[This ended the first session of the new campaign. Each character received 2 XP.]