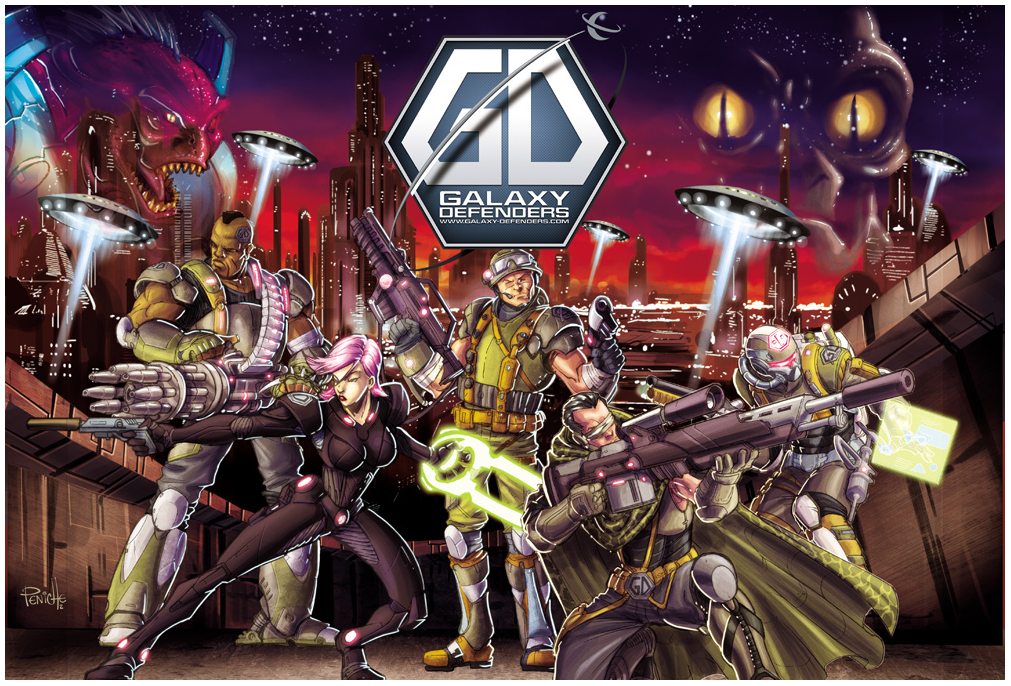 A radio cry for help comes from the nearby Area 51 scientific research base. The aliens are attacking the scientists there! The agents hurry to rescue them, if possible…

Agent Mercury charges forth and slices a gashing wound into the xeno lurking behind the sand dune.

It quickly backs away to bring it’s blaster to bear…

but not before Titanium cuts it down with his SAW.

Just as the machine gun fire subsides, a woman wearing a blood stained lab coat bursts out of the closest door, quickly followed by a 8 foot tall spider-alien! It’s claws tear into the woman’s flesh, and a moment later, her screams abruptly die.

Meanwhile, the dying cries of another scientist from around the corner presage the arrive of another spine critter.

Mercury rushes forward to try to pull the aliens’ attentions away from the civilian scientists, her blade slashing deeply into the xeno – but not quite enough to kill it.

The other Arachnos attacks with its pincers, but she manages to parry and dodge the most damaging ones.

However, the grievously wounded Arachnos is able to grasp onto her and drag her back inside the building.

Titanium comes up to support her – but one spine critter leaps through a window and lunges forward with its jaw, repelled only by his thick armor. The other one charges forward from around the building, blood from the scientist still dripping from its maw.

Mercury’s blade dispatches the Arachnos, setting herself free to move to engage the other Arachnos.

But the scent of blood from her ragged wounds also draws the spine critter’s jaws towards her. Thankfully, ber training at such close combat melee allows her to defend against the vicious teeth.

This gives the medic an opportunity to move up and deploy the GD-209 drone – its autocannons quickly dispatching the spine critter.

Just then the radio squawks an encouraging message from HQ “we found the malfunction is caused by an alien jamming mechanism – proceed with visual confirmation of the scientists ASAP!” And so Agent Titanium moves up to the office building, but it turns out the detected signal just inside the door is an alien, and not a scientist! The SAW at short range makes quick work of the Xeno however.

But the xeno is accompanied by another Arachnos, and yet another leaps through the back window into the room where Mercury is, surprising her as its claws tear into her. She drops, fighting to remain consciousness in the hopes of rescuing the scientist she spies cowering in the corner of the room!

The medic quickly moves up and pumps Mercury full of stimulating medicines – this jolts her up and with the extra vigor, delivers a debilitating blow in retaliation against the Arachnos.

Mercury rescues the thankful scientist and moves to the back door…

…where the signals turn out to be a another xeno chasing a scientist! And next door, a spine critter scrambles to join the melee against Titatnium.

Mercury’s sudden appearance and attack causes the ranged-combat Xeno to back away! The medic risks himself to rush up to rescue the scientist, even as it puts him directly into the line of fire of the Xeno.

Meanwhile the scientist just next door attempts to stay out of the way of the flying spines and razor sharp claws of the raging melee between Titanium, the Arachnos and the spine critter!

It is not looking good for the agents – a Xeno Beta has just entered into the room with Titanium. (And I just drew the card that activates all the baddies!) The agents are close to death and the scientist is bleeding out. Does Titanium go for a hail Mary to try to rescue the bleeding scientist? Or try to live to fight another day, leaving the scientist to the aliens?

Titanium attempts the rescue – and the gambit fails. The scientist dies, impaled by a hail of spines. He gasps out with his dying breathe, “there… is… another…”

A moment later, that last scientist bursts out of the door of the main research complex, a pair of Arachnos chasing her and discharging a sticky web that suddenly traps her. Mercury can just reach her by leaping through the window, but can only attempt a rescue after dealing with spine critter waiting just outside the door…

No other scientists left to rescue, the agents themselves need to get out alive! No easy task as the medic still has the Xeno Beta targeting him as well at the Arachnos that is clawing at him, and Titanium still faces off against three aliens.

As Mercury moves back to support the medic, the pair of Arachnos rapidly advance on them. A flurry of vicious attacks leaves the medic and Titanium teetering on the edge with one hit point left…

At the end, Titanium was able to escape, but the medic fell to the barrage of blaster fire from the Xeno, sacrificing himself to save Mercury one last time.

Well, I managed to meet the victory condition of rescuing three scientists and have at least half of the agents survive… That was very close!