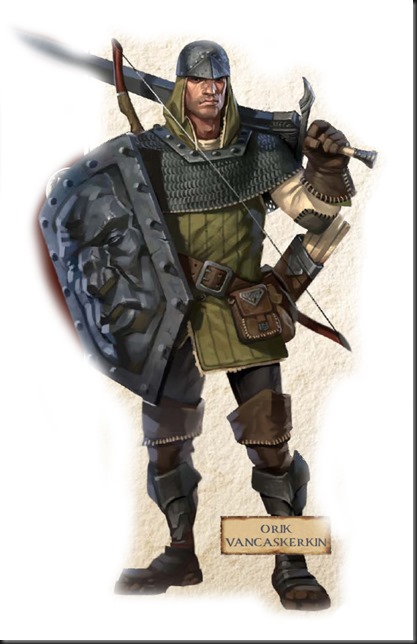 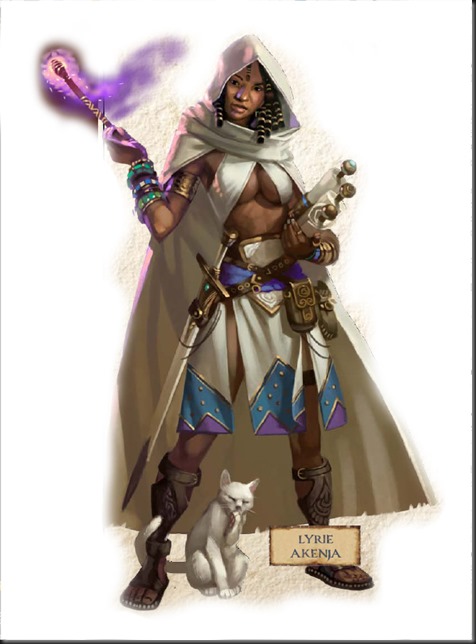 I changed Lyrie to be a Magus as a solitary level 4 Wizard for 2 reasons: (1) aw written, she would not even be a speedbump against a full party , and (2) I thought that the concept of a magical rapier wielding magus with the high crit chance of shocking grasp would be too sweet to pass up! (My players are min-maxers and it’s fun for me to create similarly powerful challenges). To make it interesting as well, after the heroes’ initial incursion onto the island, the defenders were on alert; the goblin bodies were animated into undead, and Lyrie was stationed at the keep.

Before Combat Before combat starts, Lyrie casts mage armor. If she has sufficient warning, she subsequently casts shield.
During Combat

2nd round: Swift action to spend 1 arcana pool to enhance rapier to +1 keen (lasts 10 rounds), cast shocking grasp, and use spellstrike to deliver the attack.

3rd round: Arcane strike each round after (+2 damage)

Lyrie uses windy escape (immediate) against any attacks that successfully hit her. She casts mirror image if she gets hurt even with windy escape. She uses spell recall (swift) for windy escape to use defensively. After using up her prepared offensive spells, she switches to using her wand of shocking grasp with spellstrike, all the while using the high crit modifier of her keen rapier.

Morale Lyrie is a coward at heart, and when she gets to half her hit points, she attempts to flee to the closest ally for help, using invisibility to help flee. If she believes the PCs have harmed Tsuto, though, her anger takes over and she fights to the death in an attempt to avenge him.

Ahhh… what fond memories of Nualia. I too up’ed her challenge, and what a memorable experience! She is the perfect candidate to be a Antipaladin, so I used a mash-up of suggestions from the excellent Paizo forums on variant interpretations of Nualia. In combination with her aura of cowardice, and the yeth hounds fear effect with baying (and the possiblity of Nualia herself using the bane fear effects!), half the party was always cowering in fear. The memory of the fight was driven home with the monologue I gave the players having their PCs experience her troubled backstory. Quite fun!

You may only apply a single Cruelty ability to each use of Touch of Corruption, chosen when used.
Cruelty (Staggered) (3 rds) (DC 16) (Su) When you use your touch of corruption ability, you may also make your target staggered for 1 rd per 2 Antipaladin levels

Before Combat If Nualia suspects combat is imminent, she summons her fiendish spirit into her sword, granting it the vicious ability, and casts protection from good.

During Combat Nualia activates her Sihedron medallion as a free action at the start of combat to gain false life.

She prefers to casts litanies on her enemies while in melee. She prefers to fight with her bastard sword and claw, her face an impassive mask save for her eyes, which blaze with anger; but she will not hesitate to use her touch of corruption to stagger particularly dangerous enemies. If she can, she will move to make sure her aura of cowardice affects as many of her opponents as possible before her yeth hound ally uses its bay.

She uses smite good as quickly as possible, preferring to target good-aligned divine casters. If possible, she moves into the hall to the south so that it’s harder to surround her, and so she has an escape route handy, using channeled negative energy to clear a path if needed.

Morale Nualia is loath to abandon her hard work, but if reduced to fewer than 15 hit points, she does just that, reasoning that escape and eventual revenge is better than death at the hands of the PCs. She does her best to flee Thistletop, ordering any surviving minions she encounters to guard her retreat.

To increase her nastiness even further, there’s a gray area in the rules that suggests she might be able to use her claw to deliver her touch of corruption as a standard melee attack – if you decide to go that way, her claw attack is a +9, and deals 1d6+3 damage (plus the touch of corruption damage and stagger effect).

Also not only is the yeth hound bay a fear effect, but so is bane, and bane‘s penalty to fear effect saves stacks with her aura of cowardice. She should quite literally leave your PCs cowering in fear! 😉